A pouwhenua recognising the connection between Ngāti Tama ki Te Tauihu and Ngatimoti School was unveiled and blessed on Friday at a dawn ceremony in Motueka.

The pouwhenua was commissioned by the Trust and carved by Ōtūwhero resident, Tim Wraight as part of connecting with school sites that were returned to Ngāti Tama.

Ngāti Tama purchased the schools land from the crown as part of their commercial redress package in settlement in 2014.

Carver Tim Wraight designed the pouwhenua to reflect kaitiakitanga of the natural environment that the children and school community are involved with.

As the Ngā Tīmoti community, school and Ngāti Tama iwi admired the Pouwhenua, a crowd favourite came in the form of the tamaiti (child) carved into the base of the Pouwhenua and peering out from beneath the cloak. The tamaiti represents the children of the school.

The Pouwhenua unveiling was also a chance to reflect on the history of the local area, and discuss how the several versions of the name of the school and area came about.

Cultural Manager at Ngāti Tama ki Te Waipounamu Trust Te Ahu Rei explained that “one popular version follows the story of a man by the name of Tīmoti (Timothy) – an avid eeler in the local area who carved, ‘Nā Tīmoti’ (belonging to Tīmoti), into a tree to mark his fishing spot”

He says that “it appears that over the years, the name has gone through some changes and is now more commonly spelt as one word ‘Ngātīmoti’ which may be interpreted as ‘Ngā Tīmoti (the descendants of Tīmoti)”.

The pouwhenua is the second installation by Ngāti Tama at a school. The first pouwhenua was unveiled and blessed in December 2019 at Motupipi School in Mohua. 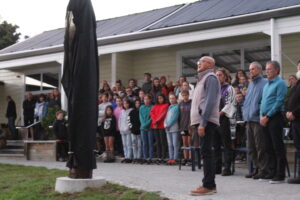 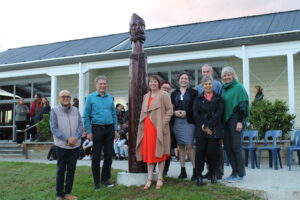 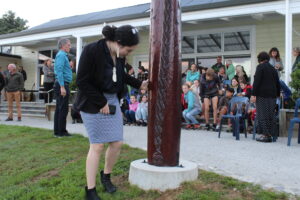 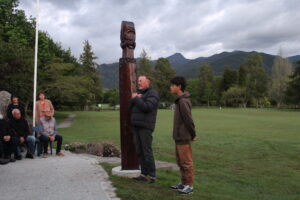 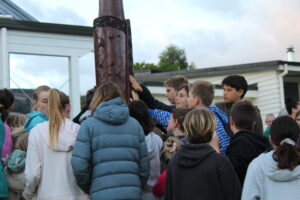 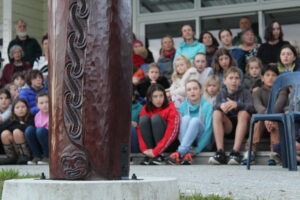