Mr G Hoete will be running a wānanga specifically for rangatahi next Tuesday, 25th & Wednesday, 26th January. Drawing from his and his wife’s personal experiences, this kaupapa brings light to the challenges of te ao hurihuri and the realistic struggles that many face every day. As the name suggests – Tūmanako – it’s a kaupapa of hope. One which empowers rangatahi to personify these challenges, allow pūrākau from the rohe, and their visions of hope to come to fruition through mahi toi. Attached is a basic outline of the two days.

Once a site has been approved, Mr G & Milly will return to Whakatū and do their mahi over a week-long period. Herein lies another opportunity for more rangatahi to assist over the course of the mahi.

There are two places available for Ngāti Tama rangatahi to join this kaupapa. If you or your child fits the following and would like to take part, please contact us:

We apologise profusely for the short notice. We will need names and confirmation by THIS Friday, 21st Jan 2022 as this kaupapa has its first hui kanohi ki te kanohi next week.

‘Graham Hoete (Ngāi Te Rangi, Ngāti Ranginui, Ngāti Awa), a.k.a. Mr G, is a self-taught artist who works across various mixed media but is probably best known for his photo-realistic spray-painted street art. His murals have attracted international attention, most notably his portrait of Kiwi basketball star Steven Adams in Oklahoma City and Mr G’s tribute to Prince, a Purple Rain themed mural in Chanhassen, Minnesota, that made headlines all around the world.

Mr G’s work is highly sought after and he has accepted commissions throughout New Zealand as well as Australia, the USA and Scotland and he has produced work for prominent companies and organisations including Nike, Westfield and Frucor.

Born in 1979 in the Bay of Plenty, Mr G has remained firm to his roots.  While he could live anywhere in the world, he resides in Papamoa… So it made perfect sense when it was confirmed in 2019 that Graham would hold his first solo exhibition (HOME : Mr G – which ran from November 2019 to February 2020 at the Tauranga Art Gallery) with the theme of haukāinga (home), including his family connection to Matakana and Motiti Islands.’ 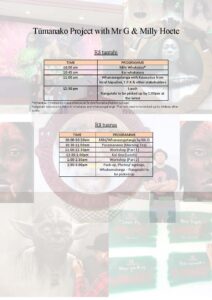